I hope you find your niche someday soon

1993 was another good year for music, with Nirvana’s In Utero, Radiohead’s Pablo Honey, The Smashing Pumpkin’s Siamese Dream, and A Tribe Called Quest Midnight Marauders, Wu-Tang Clan’s Enter the Wu-Tang (36 Chambers), Fugazi’s In on the Kill Taker, Digable Planets’ Reachin’ (A New Refutation of Time and Space), The Breeders’ Last Splash, Dinosaur Jr.’s’ Where You Been, Sepultura’s Chaos A.D., Archers of Loaf’s Icky Mettle, Swervedriver’s Mezcal Head, Quicksand’s Slip, Bad Religion’s Recipe for Hate, and The Posies’ Frosting on the Beater – and I’m sure there are more I am missing!

All of these albums had a big impact on my musical taste, interests, and listening habits – though I’ll have to go with Fugazi and Quicksand as my selections to focus on this month. Just like last issue, I’ll include some brief words on a few other important albums – some of these are just too good to pass over completely.

Fugazi’s In on the Kill Taker (Listen) and Quicksand’s Slip (Listen) are both post-hardcore masterpieces. Both records acted as gateways into the world of hardcore for me – charting the course for some of the biggest changes in my life. (Even more on that in future issues!)

Fugazi led to their back catalog and all of the Dischord record label, while Quicksand led to Gorilla Biscuits, NY hardcore, and Revelation Records. To say that was life changing is an understatement.

Quicksand formed in 1990 with Walter Schreifels on guitar and vocals, Tom Capone on guitar, Sergio Vega on bass, and Alan Cage on drums. Schreifels was also in Gorilla Biscuits and Youth of Today, two of the biggest hardcore bands of the period. Capone spent time in Beyond and Bold. Cage played with Burn and Beyond. Vega played with Collapse and Absolution. A hardcore super group, no doubt.

Quicksand put out a 4-song EP on Revelation Records that year, which included three songs that would later appear on their first full length, Slip. That full length was released three years later on Polydor - a major label - which at the time was generally a controversial subject in underground music.

The album itself is amazing from start to finish. Every single song is good. Heavy, groove based riffs and a top notch bass/drum combo – the musicianship and song writing helped set Quicksand apart from the very beginning. Lyrically, Quicksand tends to focus on the personal: conflict, relationships, and identity. In many ways, it was a more refined and mature approach to classic hardcore song topics.

What a way to start the album with drums kicking into a heavy groove. It immediately grabs your attention.

The lyrics of this song spoke to me because I felt out of place and awkward as a teenager - like most young people that find hardcore, punk, or some alternative means or outlet for creativity and expression. We’re looking for someplace to fit in and find others in a similar place.

And as an introvert, “the problem is hesitation” rang completely true and that led to a lot of second guessing.

For me this song is about knowing and believing yourself – rejecting the societal pressure to fit in.

Even this line: “No, I always go out eating with my best friends.” - can mean both knowing who your friends are and feeling comfortable with yourself - so even when you are alone, you are with a friend.

This is my favorite song on the album. Lyrically the entire song focuses on disappointment and regret:

But Walter ends it with some great advice:

The first thing you feel when you miss out on something or make the wrong choice is always disappointment. What you do after that is always the most important.

This song is about the stories we tell ourselves to avoid pain and sadness – to the point of not even recognizing yourself.

I’ve seen Quicksand probably five times and they’ve always been an amazing live band. Here’s a set from 2017 after they re-united as a 3-piece:

In on the Kill Taker by Fugazi

Fugazi is my all-time favorite band and I have this album to thank. Steady Diet of Nothing was actually my first introduction to the band, but I just couldn’t get into it at the time – it sounded almost industrial to my ears. (I like it now, by the way!)

In on the Kill Taker was the album that broke Fugazi into the “mainstream” in a sense that it hit at the same time bands like Nirvana, Smashing Pumpkins, Sonic Youth and others were redefining alternative music and creating fans all over the world.

Fugazi was formed in 1986 by Ian MacKaye (guitar, vocal - who was also in Minor Threat and Embrace), Joe Lally (bass), and Colin Sears (drums - who was also in Dag Nasty). Shortly after forming, Sears left to return to Dag Nasty and Brandan Canty (a member of Rites of Spring) replaced him on drums in 1987. Guy Picciotto (guitar, vocals - member of Rites of Spring and One Last Wish) would initially sing with them at early shows before officially joining the band in 1988.

Beyond their music, Fugazi was also famous for their business practices – releasing their own music, $5 shows, $10 albums, no other merchandise like t-shirts, and a staunch DIY work ethic. In reality, much of that came from the punk and hardcore scenes – they just were the face of a whole world that mainstream music fans weren’t aware of at the time.

The combination of this DIY work ethic and the political/social justice messaging in their lyrics won me over as a fan. Behind that, the angular guitar riffs, the reggae/dub influenced bass, and one of the best rock drummers of all time combined to make some of the most unique and creative punk music ever.

This song is about ugly nationalism – like patriotism used by default to cover for not even considering the impact of our country’s past/present actions or having a real solution to a present problem.

Or this ending section, which I could read as either being so invested in the patriotism that we blindly follow along OR potentially the business investment in building a false image of our country that keeps us divided. Either one fits.

This song takes on special importance in 2022, with the horrible laws passed in states like Texas, Idaho, Florida and others that encourage people to turn in already marginalized people in the LGBTQ+ community.

I have a feeling the song was originally about undercover cops and other law enforcement agents that have historically infiltrated activist groups in the past.

This song seems to be about backstabbing someone and then hiding behind “humor”. The chorus seems to contemplate revenge. The phrase “turn the screw” generally refers to doing something to someone in order to force them into action – “re-turning the screw” would be reversing that back on the orginal party.

This song is clearly about the U.S. government’s actions to spread disease amongst the Native American tribes as we expanded our footprint on the continent.

There are a number of theories about the subject of this song, but I am in the camp of it being about Magic Johnson and HIV. Let’s look at the lyrics:

Championship teams have ticker tape parades (the Lakers won in 1987 and 1988 - just 3 years prior to Magic’s announcement and Magic was on the 1992 Olympic team that won a gold medal - after his announcement) and Magic was certainly a household name:

A classic sports trope/cliche is “going to war” and “battling” the other team:

Fugazi’s homage to Cassavetes is basically related to the directors’ DIY ethics, something the band always fully embraced – not only as a band, but for the record label their founder created, Dischord. Similarly, Cassavetes also formed a distribution company for his movies, Faces International. via Genius.com

A song about betrayal and distrust:

Other Quick Highlights from 1993

Musically not too far apart with jazz and bebop based beats and loops. Digable Planets had the added layer of jazz influenced lyrics and style, which ATCQ were master storytellers and lyricists. These two albums were the soundtrack to my time on the high school track team. They were top notch to listen to while running. Both groups are still very high on my list of favorite hip hop artists.

I wore these two tapes out on a family trip out west in the summer of 1993 – in fact I bought the Siamese Dream tape in Bozeman, Montana before we headed south to Yellowstone National Park.

I was exposed to The Posies through listening to a great Canadian alternative radio station (102.1 CFNY-FM), particularly Alan Cross’ radio show “The Ongoing History of New Music” and George Strombo. That station was my introduction to Sloan, Tragically Hip, Ned’s Atomic Dustbin, Doughboys, and many other alt-rock bands I would quickly love. I also honed my ‘quickly hit record on the tape deck’ skills listening to this station!

Here are some new(ish) releases I’ve been listening to and enjoying:

(This issue took so long, some of these are actually older now!)

And some older releases that have made it (back) into regular rotation:

I also have two 2022 playlists up on Apple Music:

Cuffed Up - Live on KEXP Quicksand in Toronto (photo by me) Fugazi in Rochester, NY (taken by me)

Thanks for reading this issue of One Last Wish! Next issue we’ll see you in 1994. 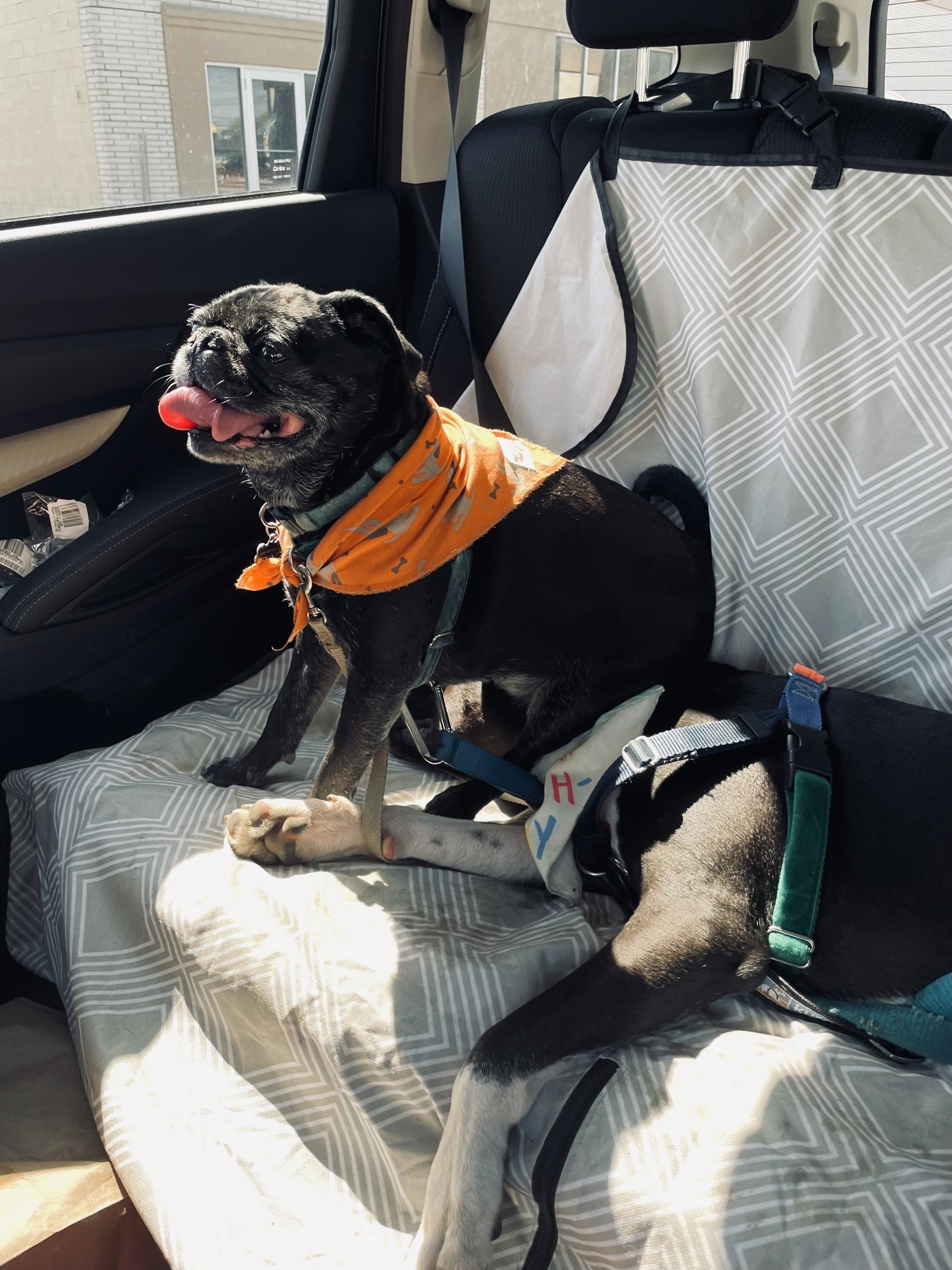